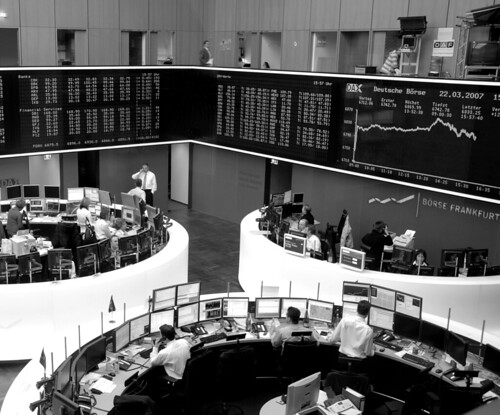 The main reason why finance’s share of GDP has outstripped its production of intermediation services, according to [Thomas] Philippon, is a huge increase in trading volumes in recent years. Trading, of course, generates fees for financial institutions, with limited marginal social benefits. Yes, we need some trading to have price discovery. But if I sell you a share of Apple on top of the other 33 million shares that were traded today, is that really helping determine what the price of Apple should be? The more that financial institutions can convince us to trade securities, the larger their share of the economy, whether or not that activity improves financial intermediation. [emphasis added]

Kwak’s comment interested me for several reasons. I thought immediately of Philip Augar‘s trilogy of books on London’s transformation as a global finance hub (The Death of Gentlemanly Capitalism; The Greed Merchants; and Chasing Alpha). Kwak’s emphasis on intermediation — intermediaries who match lenders and borrowers — reminded me of the Smart Internet Technology CRC’s emphasis on strategies of first mover advantage, disintermediation (removing intermediaries), and end-user innovation. Finally, Kwak espouses a critical view of trading that resonates with Occupy The SEC and other Wall Street critics.

Traders’ usual response is that they provide the market with liquidity as well as price discovery, and that estimates of assets’ future values can vary.

The media has two dominant narratives about traders. First, traders are American Psycho-like psychopaths that ‘go rogue’. Second, proprietary traders at financial institutions and hedge fund managers can make exorbitant amounts of money. The first narrative occurs during recessions and on the discovery of major cases like Barings’ Nick Leeson or Societe Generale’s Jerome Kerviel. The second narrative occurs during the initial stages of macroeconomic booms and speculative bubbles. A New Yorker profile of private equity maven Stephen Schwarzman in 2007 captures the transition between the two narratives.

In September 2011, just as the Occupy Wall Street protests were unfolding, Germany’s Der Spiegel cited a study that appeared to prove the first narrative. Pascal Scherrer and Thomas Noll, two MBA students at University of St. Gallen, interviewed 28 Swiss traders, using “computer simulations and intelligence tests.” The study went viral and it was cited throughout the United States mainstream and financial media (including by my old boss Richard Metzger at Dangerous Minds with his acerbic wit). The authors aren’t easily accessible: a Google search brings up other people – an Australian post-doctoral fellow in tourism and a German software engineer. St. Gallen’s MBA program did not release the paper — but sources did reveal it was an MBA student assignment and not peer reviewed academic research.

Even without seeing it the Scherrer & Noll’s study raises questions: the kind that get asked in blind peer review and by research administrators and managers. Did Scherrer (“forensic expert”) and Noll (“a lead administrator at the Pöschwies prison north of Zürich”) have the financial markets background to contextualise what the traders were saying and why? Did their background potentially bias how they would interpret the data: looking for or interpolating certain correlations? What specific “computer simulations and intelligence tests” did Scherrer and Noll use? How were these tests framed for the trader participants? Is the data from two different groups — traders and psychopaths — truly, directly comparable? From where, how and whom did the psychopath data come from? Who else, apart from the psychopaths, was the control group? What other competing hypotheses or theories were tested? Are the test subjects institutional or day traders? What instruments and markets did they trade? What range of trading strategies did they use and why? What was their performance like during the study’s time period? You will find these aspects in the methods and research design section of most rigorous academic journal articles. It is why top journals now require academic authors to release the raw, de-identified data for others to examine.

Noll’s comments to Der Spiegel are revealing, when the above is taken into account. Some traders are “egotistical”: perceiving themselves to be entrepreneurs in a financial institution. Trading attentiveness can require high ego-involvement. Trading can be a solo activity — affecting the study’s variable of “readiness to cooperate” — although prop firms like SMB Capital do get their traders to cooperate in order to get synergistic, group effects. Traders are usually risk-seeking and aware of time-based competition so of course they were “were more willing to take risks” since careful risk management is essential to arbitrage and trading. Noll expressed surprise that traders sought “a competitive advantage” and “weren’t aiming for higher winnings than their comparison group.”

But this a sign to me that Noll misunderstood the traders and also the financial institution they worked in. Prop traders can gain 40-60% of their compensation through bonuses with the institution can change based on risk-adjusted performance. In essence, trading is about gaining competitive advantage in a zero-sum game — particularly in highly stochastic and volatile areas like currencies and commodities futures. This is why many traders read Sun Tzu‘s Art of War and Miyamoto Musashi‘s Book of Five Rings, or study non-cooperative game theory and behavioural finance. Then there’s why University of St. Gallen possibly released Scherrer and Noll’s study to the media: the MBA program emphasises “responsible leadership” and the study nicely fits with this institutional goal. However, it obscures other explanations for ‘rogue traders’, such as Adam Curtis noting in his documentary 25 Million Pounds that Barings Bank management likely knew of and endorsed Nick Leeson’s trading activities whilst they were profitable. For many people, Scherrer and Noll just confirmed what they already felt about Wall Street traders.

In reality, ‘traders as psychopaths’ is a media-created narrative. It can be traced to Gordon Gekko (Michael Douglas) in Oliver Stone’s film Wall Street (1987); to Ivan Boesky and Michael Milken; to Michael Lewis‘s autobiography Liar’s Poker (1989) about his time in Salomon Bros as a bonds salesman; and to George Soros and the 1992 United Kingdom currency crisis. In the 1980s, a healthier vision of the Masters of the Universe were traders like Martin Zweig and Victor Sperandeo. A decade later, Frank Partnoy‘s cautionary biography Fiasco (1999) refashioned the image for financial crises in Asia and Latin America. John Perkins’ Confessions of An Economic Hitman (2004) expanded this to the Washington Consensus. CNBC’s Jim Cramer morphed from a successful money manager to a television personality. Satyajit Das transitioned from writing guidebooks on financial derivatives to becoming an articulate media critic. Richard Bookstaber had a more nuanced and systemic view of hedge funds with A Demon Of Our Own Design. The latest addition to this narrative is Jared Dillian’s Street Freak (2011) on his experience at Lehman Bros. and the short-lived BBC series Million Dollar Traders starring Lex Van Dam and Anton Kreil.

Scherrer and Noll’s study appealed to people whose self-image of traders came from Gordon Gekko and Liar’s Poker. The collapse of Bear Stearns and Lehman Bros. during the 2007-09 global financial crisis — and the ‘too big to fail’ negotiations with financial institutions — now reinforce this self-image. A more realistic image of traders can be found in Ari Kiev and Brett N. Steenbarger‘s books on trading psychology; in the multi-author ethnographic study Traders; and in Jack D. Schwager‘s interview books which are ‘required reading’ for many traders. I’ve seen footage of traders’ live reactions to the 1987 stockmarket crash: the traders are shocked but they still react. There’s little room for ‘traders as psychopaths’ in contemporary high-frequency trading systems (which created fears around the 2010 ‘flash crash’). But the media narrative serves as a screening mechanism: it prevents people from finding out how trading really works or how its principles can be used elsewhere in their lives. If Scherrer and Noll really wanted “a sober and businesslike approach to reaching the highest profit” then they interviewed the wrong group: they should have talked with pension fund and private wealth managers in Switzerland, or with portfolio managers. This potentially introduces scope and levels of analysis limitations into Scherrer and Noll’s study (since fund and portfolio managers can act differently to traders).

Slate‘s Richard Beales illustrates the second narrative: billionaire hedge fund managers. Beales’ target is Ray Dalio, founder of Bridgewater Associates and author of a ‘Principles’ employee handbook (PDF) which The Wall Street Journal‘s Paul Farrell compares to capitalist philosopher Ayn Rand. Beales notes that hedge fund founders usually keep a low profile; are privately owned and more entrepreneurial than banks; and have a compensation structure more aligned with investors. The second narrative is really a subset of the ‘winner-takes-all’ dynamic in superstar economics. Milken, Zweig and Sperandeo in the 1980s, Soros in the 1990s, and John Paulson now are the financial equivaelent of superstars. Beales doesn’t cite hedge fund researchers like Andrew Lo or Sebastian Mallaby. He doesn’t mention the high failure rate of hedge funds or the survivorship bias in industry databases.

Which brings me back to Kwak’s original insight. His claim that financial markets are less efficient flies in the face of new systems that lead to smaller bid-ask spreads (high-frequency trading), and more diverse, targeted fund structures (mutual, hedge and quantitative trading). Rather, these developments have led to an interlocking network of funds and financial institutions who trade, at greater volumes and in more liquid instruments. In this network, the fund and portfolio managers, and the traders, occupy highly lucrative niches. Understanding how and why they are successful (or fail) has taught me some significant, actionable, and pragmatic knowledge.