My gut response on reading Kocieniewski’s piece was that it had something to do with trading: probably proprietary desk strategies that used swing trading or that manipulated spreads. I had experienced that in late 2011 during my first trades, and pieced the evidence together from regulatory filings and visits to Mitsubishi UFJ Bank in Tokyo, Japan. Yglesias later confirmed my instincts when he linked to Izabella Kaminska’s FT piece that explained the Goldman Sachs trade.

I learned a couple of things from this exchange. Three years of hard work means I am starting to slowly understand how financial markets really work. I saw from a series of past trades how similar dynamics could be repeated today. My gut instincts about the Goldman Sachs trade were correct. But I didn’t have the precise, conceptual understanding of the commodities markets and the relevant central bank regulatory loopholes — despite knowing what contango and backwardation were — to nail the Goldman Sachs commodities trade in the way that Kaminska did.

This is a humbling intellectual experience.

I left freelance journalism in 2004 after a decade of work. My last piece filed was a preview of Google’s initial public offering. I could already see freelance rates were falling: they are now $US12.50 an hour or less. I learned whilst editing and writing for the alternative news website Disinformation about commitment bias, and paid my dues in deliberate practice (or: expectation, framing, hindsight, and outcome biases).

So, I was amused this week to read about how two of my favourite financial bloggers — Slate‘s Matthew Yglesias and Reuters’ Felix Salmon — dealt with ATM fees and cheque account overdrafts. Salmon goes into detail about Citibank and transatlantic differences in bank account management. It’s an elegy for retail banking’s demise. Yglesias and Salmon also illustrate that these little details are important to bloggers and freelance writers who make small incomes from writing. Retail bank fees can detrimentally impact or even wipe out a publisher’s payment.

Swartz faced potentially 30 to 50 years in prison for using MIT’s computer network to download four million academic articles from the JSTOR repository. US Department of Justice (DoJ) prosecutors alleged that Swartz’s actions would lead to the loss of millions of dollars worth of intellectual property into the public domain because of data theft. JSTOR declined to pursue charges. MIT hesitated — likely due to Swartz’s hacked access of their network and JSTOR institutional requirements — and because of MIT’s policies and procedures on the appropriate use of its information technology and internet networks. This gave the DoJ and a Federal grand jury the pretext to pursue charges against Swartz. Wired journalist Kevin Poulsen details the “cat and mouse” game between MIT and Swartz over JSTOR’s articles. Forensic expert Alex Stamos offers a critical view of the DoJ’s allegations about Swartz’s use of MIT’s computer network and JSTOR downloads.

Cory Doctorow has written a powerful Remembrance that touches on Swartz’s battle with depression. Lawrence Lessig acknowledges that what Swartz did was “morally wrong” — if the DoJ allegations were proven to be true — and counter-contends that the DoJ prosecutor acted as a bully: prosecutorial over-reach and disproportionate legal charges. The Atlantic Monthly‘s James Fallows also notes Swartz’s contributions to information access, and his depression. The Electronic Freedom Foundation‘s Peter Eckersley has praised Swartz’s political activism and contributions to significant internet projects. The New Yorker‘s Caleb Crain wrote about Swartz’s activist causes. Swartz’s family will hold a memorial service and has launched the Remembrance site Remember Aaron Swartz. Archive.org has launched The Aaron Swartz Collection.

JSTOR’s response to Swartz’s death: “The case is one that we ourselves had regretted being drawn into from the outset, since JSTOR’s mission is to foster widespread access to the world’s body of scholarly knowledge. At the same time, as one of the largest archives of scholarly literature in the world, we must be careful stewards of the information entrusted to us by the owners and creators of that content. To that end, Aaron returned the data he had in his possession and JSTOR settled any civil claims we might have had against him in June 2011.”

Swartz’s case raises significant issues that academics and institutions have largely failed to confront. Many publishers require academics to sign over their full intellectual property rights to the journal in order to be published. Some also require payment for publication. These norms and practices resemble music industry ‘payola’ from the 1950s and 1960s: pay-to-publish and little artistic or academic control over the creative outputs and intellectual property. In academia, if you don’t abide by these norms and practices then you are very unlikely to get funding, time for research, tenure, or academic promotion. Repositories like JSTOR are also important to academic researchers — and very expensive to access as an individual without an institutional subscription (which is also expensive). If — as the DoJ alleges — there is millions to be made from published academic articles — it is being made by an international publisher oligopoly — and not by the academic researchers who create the intellectual property, or the institutions and universities who facilitate the research and provide resources to research teams.

In his overview of Swartz’s “brilliant life and tragic death”, Slate‘s Matthew Yglesias touched on the academic access issue:

Should people illegally duplicate academic research? I’ll just say that the other day a friend mentioned to me an academic article that he was interested in and I thought the title and abstract were interesting too. But none of us could read it. So I went on Twitter and asked if any of the academics among my followers would send me a copy. Within an hour I had a couple dozen instances of the article in question, forwarded a copy to my friend, and we both read it. That to me seemed wonderful. The public directly and indirectly subsidizes an awful lot of academic research on the theory that knowledge is an important public good. So the public should have access to it! We should be able to arrange the institutions such that this vast storehouse of human knowledge is open to the world without people breaking into closets at MIT or having a large social media presence they can take advantage of.

One initial solution to these issues is mandated publishing in open access repositories: a solution that internet activists like Swartz have helped to conceptualise, and to diffuse as a social innovation. He might even have played a further role in this important, unfolding debate — apart from interesting blog posts and a Twitter feed. 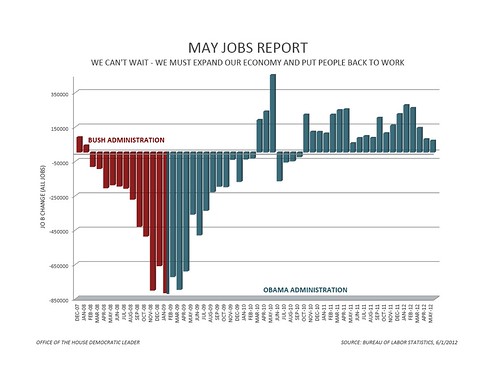 To understand why persistently high unemployment is avoidable, consider the “breakeven spread” between regular 10-year treasury bonds and inflation-protected treasury bonds. Since these instruments have the same duration and the exact same government backing them, the gap between the interest rates is an indicator of market expectations of inflation over a 10-year horizon. Ever since mid-March they’ve been slumping, probably because of bad news from Europe and the developing world. In particular, the eurozone crisis has increased demand for dollars while signs of a slump in China and India are reducing expectations for commodity prices.

I watched the Twitter feed as the US job report was announced. It was a bearish reaction. A week before I had checked the Dow Jones sectors in Australia and the US on ThomsonReuters Datastream. From mid-March through April there were significant downturns in most Australian sectors although there was off-the-chart growth in defensive sectors like beverages and food.

A correlation between stock prices and inflation expectations is not unexpected. Equities investors hope to earn an equity risk premium usually of 5-8% annual returns compared with the risk-free rate of 3-4% in Treasury bonds and fixed income markets (and 8-11% for alternative asset classes like real estate and hedge funds). However, inflation risk can erode the rate of return between the two asset classes. Inflation can also affect the input costs (and hence cost structure and competitiveness) for publicly traded firms. Finally, many equities portfolios are highly exposed to beta market risk and are thus affected by currency and interest rate exposures, unless they are delta neutral hedged. QE3 will not solve these problems.

A gem from Slate‘s Matthew Yglesias:

But it seems to me that to the extent that the training is transferrable the employee is gaining something of real value, and the employer now has the ability to reduce cash compensation accordingly. Employers need to choose between paying a premium for already-trained workers, or paying lower wages to less-trained workers but bearing training costs. [emphasis added]

Some Australian universities are shifting the training costs back onto academic staff. An entry-level lecturer role (Academic Level B) now requires a PhD, a teaching degree (unlike US universities), and a publication track record. Five or ten years ago these requirements were necessary for a senior lecturer role (Academic Level C). New academics usually gain training through the rigour (or not) of their PhD program and collaborations with senior academics in their discipline or school. Early Career Researcher grants, membership of a professional association, and research incentive scheme money for publications also provide some training opportunities. Academics whose skills underpin their research programs have more employment flexibility.

Yglesias explains an important aspect of academic salary negotiation and skills development. Some Australian universities pay relatively lower wages to academic staff, in part due to enterprise bargaining agreements. Universities may hire new academics at strategic points like just before PhD conferral so that the institutions can pay lower wages and underinvest in training. Usually, the rationale is value-driven and knowledge extractive: universities get the most highly qualified academics for their human resources budget. The training budget is a ‘nice to have’ or comes from central and faculty resources.

But, over time, this strategy leads to two divergent groups: academics who plateau mid-career and take on administrative and teaching loads, and superstar academics with training who either get rapidly promoted or who defect to other universities. The first group provides a pool of staff that has to deal with heavy administrative and workflow systems. This actually prevents the institution from doing the business process reenginering to remain competitive. The second group provides the institution with visibility. They have greater input into incentives design and managerial decision-making. A ‘success to the successful’ dynamic occurs.

In a winner-takes-all environment, perhaps the successful academics will have to become their own player-managers, be aware of and use institutional incentives, and be adept at contract and salary negotiation.